"The Band That Really Comes On"/"St. Louis Blues"
by Dallas Bartley (And The Band That Comes On)
Vocal by Dallas and the Boys/Annie Laurie
on Cosmo 484
released in 1946


Above: Promotional clipping for Dallas Bartley from 1944 Billboard. Actual release of any of these sides on Decca could not be confirmed*. The song "All Ruzzitt Buzzitt" was released by Dallas on Cosmo 476. Dallas Bartley And His Small Town Boys also recorded for National (1945) and Savoy (1945) backing up Dwight "Gatemouth" Moore and Joe Turner, respectively.

*Further Input: Of the four recordings made for Decca on September 29, 1944, only two were issued, at least 6 years later on Coral 65010. They are "Cherry Red" and "We Gonna Pitch A Boogie Woogie". This is according to the discography "85 Years of Recorded Jazz" by Walter Bruyninckx.

Click HERE for a multi-page illustrated article about Dallas Bartley at the Southwest Missouri State University website. (Will open in a separate window)


Above: Label image for Cosmo 484. The flip features Annie Laurie (possibly her first record). Dallas And The Band had one other release on Cosmo, earlier in 1946. All four sides were recorded at the same session.

Listen to this week's selections by Dallas Bartley: [Audio restoration by Dave Saviet.] 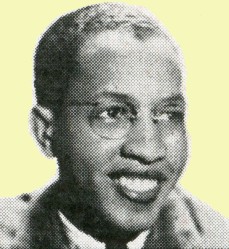