[The above photo provided by Paul Ressler.]

Above: Photo of Roy Milton And His Swing Band. Camille Howard is at left and Roy Milton at bottom right. Howard, known as "The Boogie Rhythm Gal" for her boogie woogie piano playing, was a star in her own right. (2/4/15): The man second from the top is David Robinson, bass player, as identified by his daughter Deborah Wong.

Click HERE for an article about Roy Milton by J.C. Marion.

Click HERE for an article about Camille Howard by J.C. Marion.


Above: From California Eagle dated 6/17/48. Bill Gaither was Milton's tenor sax player at the time. The Congo Club was located in Los Angeles.


Above: Label image for Specialty 330 A released in 1949. This side is a ballad led by Roy Milton with vocal harmony backing from the band. The flip, "Junior Jumps", was one of nineteen Roy Milton sides that hit the r&b charts between 1946 and 1953.

The Billboard Review (6/11/49):
There Is Something Missing (Rating=72)—Quiet, and hauntingly attractive, ballad, warbled by the maestro Milton.

Click on an option below to listen to "There Is Something Missing" by Roy Milton And His Solid Senders using Windows Media Player.

HOLLYWOOD, Feb. ll (1950) - It's a funny thing about fame, as Roy Milton well knows. Just as soon as you're ready to give up the chase, suddenly you wake up and find yourself a genuine "celebrity." "For years, I worked and worked towards this goal," Milton said in a recent interview. "Folks who heard my music liked it. But there was no startling reaction to my band and its style. And then it happened." Drummer man Milton has been playing the same type of blues since he first sat down at a set of tubs many years ago, when he vocalized with the Ernie Fields orchestra. One night the band's regular drummer failed to show for an engagement, and Fields asked Milton to sit-in and fill the gap. He has been beating the drums ever since. 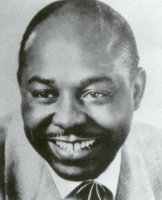 In 1938 Roy decided to try his luck in the West. Shortly after his arrival in California, he formed his own band.

Roy stated further: "I guess I was lucky. I did manage to keep my band working." People who heard the band liked it, but it wasn't until 1945, that Art Rupe, president of Specialty Records, first heard the band. Rupe liked it so well, he asked Roy to make a test audition. A long-term contract was the result.

First Record Clicks
With his first recording of "R.M. Blues," Dame Fortune smiled upon the young bandleader and opened her doors to success. Other releases followed, with each establishing Roy more and more solidly with the music-loving public. Roy returned to his hometown of Tulsa, Okla., in 1947. "That was the most thrilling moment of my life," stated Roy. "There was a gala parade in my honor, and I was given the key to the city." Roy is a very down-to-earth guy who once had ambitions of joining the ministry. His plaintive type of blues delivery reflects the deep understanding of the suffering of his people.

Styling Remains Same
Like all bands, Roy's has had its personnel changes thru the years, but his blues styling has remained the same. His Specialty recording of "My Sweetheart," backed with "Information Blues" continues to find him at the top of the nation's performing bandleaders.

NOTE: This article is from "First Pressings - The History of Rhythm & Blues".