Above: Label image for Federal 12082-A recorded on 4/25/52 and released in June 1952. Little Willie Littlefield joins in on the fun on the flip offering. Lil Greenwood recorded two records with The Four Jacks, and another with The Lamplighters, on the Federal label (1952-53). The Four Jacks also backed up Shirley Haven and Cora Williams on Federal (1952).

Billboard Clipping (July 1952): Ralph Bass at Federal has cut his first two sides with Little Willie Littlefield and Lil Greenwood and is banking on their duet "Monday Morning Blues" to do great things for the two artists.

(NOTE: Thanks to Ferdie Gonzalez for most of the recording and release dates used at this web site.)

Listen to this week's selection by the Lil Greenwood [And Little Willie (on flip only)] And The Four Jacks: [Audio restoration by Dave Saviet.] 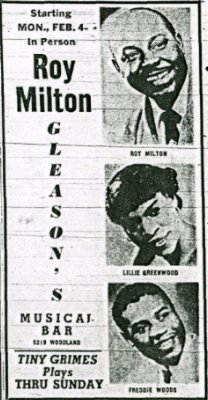