[Above image provided by Tony Fournier.]

Newspaper clipping from September 4, 1943 #1:
LOS ANGELES---Ever awake for new innovations of showmanship and unusual talent. Lucky Millinder announced last week the long term signing of Judy Carroll, attractive Hollywood songstress. She will accompany the maestro's band East as one of his featured vocalists. Thoroughly enthused over his latest discovery's possibilities, Millinder has already dubbed her "Miss Blues". He predicts a glowing future for her, one which is calculated to land her atop the heap within the next six months. New Yorkers will see and hear her late in November when the band appears at the Paramount.
Winsome Miss Carroll, a local lovely, is a home town product and possesses a soft, sweet, lilting voice with excellent quality, feeling and expression. A graduate of Manual Arts High School, she attended UCLA and began her professional singing career seven years ago. She has since had vocal roles in Duke Ellington's "Jump For Joy" and Bill Robinson's "Born Happy". She was featured with Count Basie last year at the Orpheum and has appeared in MGM's production "Lilly Mars" [sic] and 20th Century Fox's "Stormy Weather". Ben Carter has been her agent for the past several years.
In the pretty miss of the Golden State, Millinder claims he sees a combination Helen Morgan, Mildred Heyes and a Gertrude Nieson. "She is definitely the new streamlined type I have been looking for," he told reporters. "She will give boogie-woogie blues a new coloring and a symphonic something heretofore not revealed," he added.
"Miss Blues" will make her Millinder-sponsored debut Saturday night at 9:45 o'clock on the Lamplighters KHJ radio program, and late over the same station between 12:30 and 1 a.m.

Click HERE for an article about The Basin Street Boys by J.C. Marion. (Will open in a separate window)

Newspaper clipping from September 4, 1943 #2:
Add the name of Judy Carroll to important talent discoveries made by the celebrated bandleader, Lucky Millinder! Fresh from a spectacular stand at Casa Manana in Culver City, Calif., Lucky has signed an attractive golden-voiced coast songstress by that name to travel with his aggregation as featured vocalist. He has already dubbed her as "Miss Blues."
The photo at the left shows the consummation of the deal at the palatial Blueberry Hill residence of the girl's agent, Benny Carter, who is in the picture with Miss Carroll and Lucky. The other scene is a fetching informal study of the exotic, Oriental-eyed "Cinderella girl" as she toys with "Crapple," Mr. Carter's full-blooded Dalmatian.

"JUDY'S A CHANGED GIRL— Judy Carrol, former band vocalist, famous in East and West Coast nite clubs, is a changed girl. She is the latest lyrical lady to enter the field of sophisticated entertainment. No longer the cute and exotic ingenue, Judy has gone through a complete musical metamorphosis to emerge as a smartly satirical and witty delineator of song. She will soon be heard in one of those smart East Side niteries, next door to Park Avenue, New York." 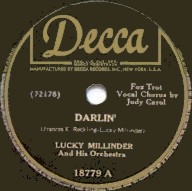 Above: Label image for Exclusive 215 A. Leon René, composer of this song, was the owner of Exclusive. His brother, Otis René, owned the Excelsior label. Both were located in the Hollywood-Los Angeles area.

Judy Carol recorded at least two tracks on AFRS VDisc, the first with an unidentified big band in January 1943 and the second with Millinder's Orchestra in August 1943. She also had releases with Millinder on the Decca label (1943-45). 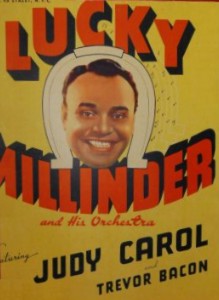 [Above poster shows "Judy Carol", but an earlier Millinder poster from June 1943 has "Judy Carroll".]

MORE SELECTIONS BY THE BASIN STREET BOYS (will open in a separate window):