IN MEMORY OF POOKIE HUDSON,

THE GREAT LEAD SINGER OF THE SPANIELS,
WHO PASSED AWAY ON JANUARY 16, 2007


Above: Photos of Pookie Hudson from 1997 and 1955. Pookie was the tenor lead singer of The Spaniels, inducted into the UGHA Hall Of Fame in 1992.

Click HERE for an article about The Spaniels by Marv Goldberg. (Will open in a separate window)

Listen to this week's selections by The Spaniels: [Audio provided by Dave Saviet.] 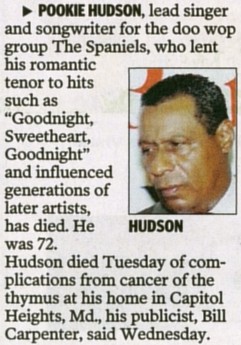