[Above photo provided by Marv Goldberg courtesy of Bobby Thomas.]

Click HERE for an article about The Vibes/Vibranaires by Marv Goldberg.
(Will open in a separate window)


Above: Label image for Chariot 105-A released in October 1954. The title on flip has "Jiving" misspelled. The Vibes' first record was "Doll Face"/"Ooh, I Feel So Good" as by The Vibranaires on After Hours 103 (1954). Both Chariot and After Hours were owned by Lexy "Flap" Hanford.

Listen to this week's selections by The Vibes: [Audio restoration by Dave Saviet.] 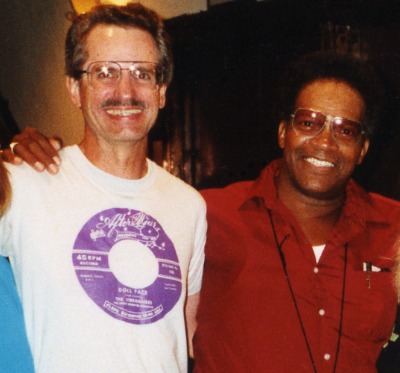 
Above: New Jersey DeeJay Joel Turnero not only "supervised" the four Vibes/Vibranaires' sides, he also took writer's credit for three of them.

This site is non-commercial. All information displayed is provided to further the general public's knowledge of RnB vocal group harmony.
Label simulation for this week's selection graphically reproduced by Tony Fournier.