Above: Photo of The Four Tones, who (at the time of this Bluebird recording) should be Johnnie Porter, lead; Leon Buck, tenor; Rudolph Hunter, baritone; Ira Hardin, baritone & guitarist; and Lucius "Dusty" Brooks, bass (photo, in front).

Above Left: Preview A-666 Label, Released 1945. This was The Four Tones' first of two releases on Preview.

A) Click on an option below to listen to Streaming RealAudio.

B) Click on an option below to listen to Downloading RealAudio.

FOR THE FOUR TONES' OTHER RECORD ON THE PREVIEW LABEL, PLEASE CLICK HERE" 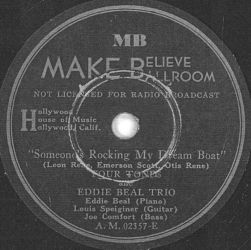 THE STORY OF "DREAMBOAT":

"Someone's Rocking My Dreamboat" was composed by Leon Renť, Otis Renť, and Emerson Scott. The Four Tones originally recorded it for the Renť brother's Make Believe Ballroom label (see image at left)! The label was named after the famous west coast radio show of Al Jarvis, where The Four Tones supposedly first sang it. This version was released in October 1941.

In the Baltimore Afro-American newspaper dated 11/1/41, a photo shows Leon Renť presenting this record to the Four Tones. 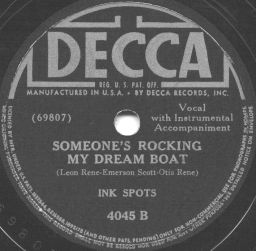 An 11/22/41 issue of the same paper has this blurb: "The song, "Someone's Rocking My Dreamboat", may hit #1, and has been covered by the Erskine Hawkins Orchestra and is to be recorded by The Ink Spots"!

Indeed, in November 1941, the song was released by The Ink Spots on the Decca label (see image at left).

Shortly after, The Four Tones re-recorded the song for Bluebird, who released it in January 1942. Note that The Eddie Beal Trio are on both the Make Believe Ballroom and Bluebird versions.


[Most of the information contained in this page, as well as the Make Believe Ballroom label image, was provided by George Moonoogian]