Above: Willis Sanders, lead singer of The Embers. Willis was previously a member of The Marshall Brothers on the Savoy label.


Above: Label image for Herald 410 released in May 1953. It was originally issued in February 1953 on Ember, hence the origin of the group's name. Ember was owned by Mercer Ellington (see writer's credit on label) and Jack Angel. It was acquired by Al Silver in May 1953, who promptly reissued both sides on his Herald label.

R&B BEAT COLUMN (May 1953):
A new r&b tune stirring up some action is "Paradise Hill" by The Embers. Originally released on the Ember label, the master was acquired by Herald Records who reports excellent results in Jersey and points south. Latest cities to come in strong are Atlanta and Baltimore.

Herald Records, the latest addition to the r&b field, has pacted the Embers, a new vocal group. The firm now has 20 distributers across the country and is releasing waxings on a regular basis. The head of the firm is pressing exec Al Silver.

Listen to this week's selection by The Embers: [Audio restoration by Dave Saviet.] 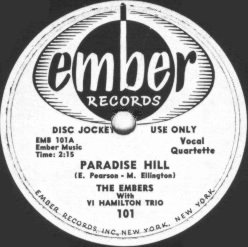