Above: Clipping from 8/21/54 issue of Billboard Magazine.

Click HERE for an article about Ruth Brown by Marv Goldberg.
(Will open in a separate window)

Above: Ruth Brown recorded for Atlantic Records from 1949 to 1960. These were mostly non-group recordings, although she did release one record with The James Quintet, two with The Delta Rhythm Boys and five with "Her Rhythmakers."

Above: Another great composition by Chuck Willis! Listen to the lyrics - simple, but so effective! (His "Close Your Eyes"/Five Keys & "The Door Is Still Open"/Cardinals fall in this same category).

"Her Rhythmakers" on this record were actually The Drifters, who provided this function on a total of four of Ruth's released sides. 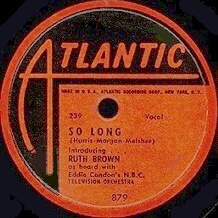 Click on title below to listen to Ruth Brown's first record (no group).