Above: Spark 105 Label. This is the second of two records by Willy & Ruth on Spark. The flip side is "Cordelia". Willy (who was Willie Headen) also had two other releases on Spark as lead singer of The Honey Bears. "Love Me" was recorded by Elvis Presley and released on RCA Victor EP/LP in 1956. 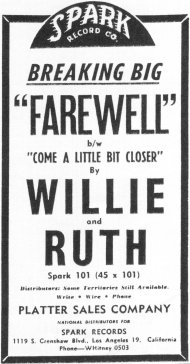 Hollywood, Feb. 28, 1954 - Spark Records, a new label headed by A.L. Stoller, bowed recently with two releases in the rhythm and blues market. Label has set Gil Bernal, vet tenor man, and Willie and Ruth on their first sides. Lester Sill has been named national sales manager, with Jack levy repping the firm in the East. Songscribes Jerry Leiber and Mike Stoller, who penned the click "Hound Dog" of last year, will handle the a.&r. work for the firm.

Click on an option to listen to Alan Freed playing Gil Bernal's "The Whip" on his 1954 Moondog Show on WJW in Cleveland: 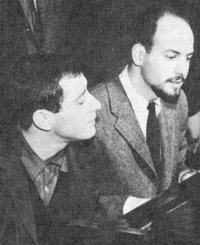 Hollywood, Nov. 13, 1954 - ...To date, the Spark firm has released only eight sides since its organization in March of this year. A number of these sides have attracted national attention, such as "Riot In Cell Block No. 9" by The Robins. (Jerry) Leiber and (Mike) Stoller (see photo at left) are hailed as two of the most prolific young songwriters in the business, and have been responsible for many hits, including "Hound Dog" and "Bazoom"...