Click HERE for a short article about Three Bits Of Rhythm by J.C. Marion.

Above Left: Label image for Modern 20-567B. Recorded 11/8/47, released 2/48 per Ferdie Gonzalez. This was The Commanders only record. Does anyone know the members of this group? The "Tepper-Brodsky" shown on the label were popular composers who wrote "Red Roses For A Blue Lady", among others.

WARNING! On right is a classic example of a "double-entendre" song! It is about working in a department store in Chicago. The guys are working in various departments. In each case, a lady comes in asking for one thing, but receives something else.

Listen to this week's selections:
(Audio restoration by Dave Saviet) 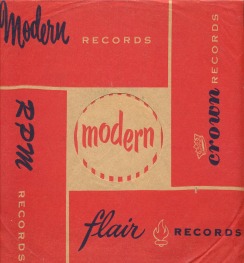 At left is an overlay of two Modern Records 78 RPM sleeves.

Modern Music started operations in 1945 in Los Angeles. The label was officially incorporated as "Modern Records, Inc." in early 1948.