Above: Dolly Dawn. Click HERE for information about Dolly Dawn at the Peter Sando website. (Will open in a separate window)


Above: The C-Notes (From Cincinnati Times Star newspaper, January 1952).

Caption with the above picture:
The C-Notes of Cincinnati, singing quintet, are to appear Monday at 8:30 p.m. over CBS on Arthur Godfrey's Talent Scouts, according to Wes Lay, leader of the group. Wes, former member of Ralph Flanagan's "Singing Winds" and Johnny Ziegler's "Varsitones," is bottom right in the picture, the young man above him being Mort Hillman. The other two men are Ronnie Irwin and Charlie Hiller. Jane Griffis is the girl.

Wes writes from the Hotel Henry, New York, where the group is staying, that Bill Nimmo also lives there and that R.D. Wilbur, former WLWer and brother of Jimmy Wilbur, has been most helpful with the group. Wilbur is currently with WINS.

The C-Notes have arranged many auditions with various agencies and shows, according to Wes, who says that the group merely piled into his auto and left Cincinnati Jan. 5, were auditioned by Godfrey last Tuesday, and were picked to appear this Monday.

Caption with the above picture:
The Varsitones, Cincinnati singing group, are featured on WLW-T's new summer quiz show, "Get On The Line." Formerly singers on the other two local video stations, the quartet use a style similar to that of the Modernaires.

Cincinnati Enquirer, August 9, 1950: The Varsitones, a quartette composed of Jack Gutjahr, Wes Lay, John Ziegler, and Barbara Butsch [sic?], jackpot winners on the Horace Heidt show, are to entertain the Cincinnati Executives Association at noon Monday at the Hotel Sheraton-Gibson.

Hutchinson News (Hutchinson, KS), December 3, 1950: ....wmalph Flanagan has added a vocal group to his organization, the first since he organized his band. To be called the Singing Winds (also title of the Flanagan theme song), the group is composed of three lads from Cincinnati University and the feminine vocalist, Lynn Tilton. Miss Tilton, who replaces Hope Zee, is a cousin of veteran vocalist, Martha Tilton.

Above: Label image for Jubilee 6002. This is the only known record released by The C-Notes. Above right is a picture of Dolly Dawn. She had at least one other record on Jubilee (#6036), "It's Too Soon To Know," released in 1953, but without vocal group backing.

Brooklyn Daily Eagle, May 11, 1951: CASA SEVILLE—Dolly Dawn, with a new hair color, new figure, new gowns, and some pleasant small talk (also new for her) to go along with her old singing voice, is the "name" act and a pleasant one, in the Spring revue which opened last week at Casa Seville in Franklin Square. She puts a lot of zing into the show.

Listen to this week's selections by Dolly Dawn And The C-Notes:
[Audio restoration by Dave Saviet.] 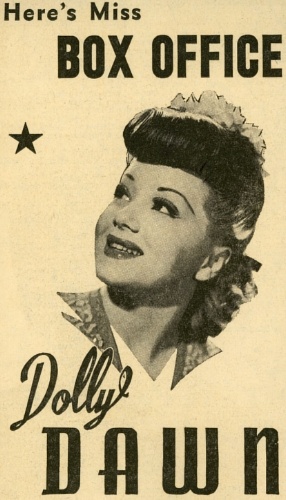 [To download audio files, right-click on link and then select "Save (Link) Target As..."]


At left is a clipping from the 1943 Billboard Music Year Book.