[The above photo provided by George Moonoogian]

Above Left: Continental #6067, Released 1948. The 78 rpm record shown is on red wax! It's their first of at least five releases on this label.

FOR OTHER RECORDS BY THE DIXIAIRES ON THE GOTHAM AND CONTINENTAL LABELS, PLEASE CLICK HERE.

For a group that recorded very prolifically over their short span, roughly 1948-50, there are very few photos of them, and all research has been pieced together. Here is a summary of what information I have.

The Dixiaires were formed in late 1947 by J.C, Ginyard, who at the time was a member of The Jubalaires. He had begun his career in 1936, forming a group known as The Royal Harmony Singers, renamed The Jubalaires by their manager in 1945 for recording purposes. In 1947, Bill Johnson, who had been with The Golden Gate Quartet, joined The Jubalaires. He immediately brought tension to the group, so Ginyard sought out people to start another group of his own.

With himself as lead, Ginyard recruited tenor, Joe Floyd, and baritone, Jimmy Smith from The Silver Echoes. He later added bass, Johnny Hines, of The Reliable Jubilee Singers. Feeling he needed an accompanist, he tracked down guitarist, Abe Green, who had been with both The Gates and The Jubalaires in the past, and who was part of a jive unit called The Rays Of Sunshine. 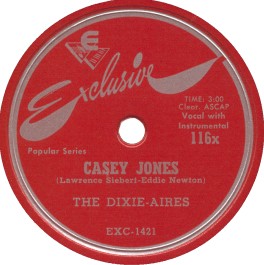 This new group, The Dixiaires, then started recording... and I MEAN...recording! They, at one time, were recording or having records released by as many as six or seven different labels, including Coleman, Continental, Lennox, Spirituals, Sittin' in with (SIW), Sunrise, and, later, Exclusive (see label image at left). Trouble started in late 1948, when they had their only hit, "Go Long", for Gotham. Because of Ginyard's affiliation with The Jubalaires for so long, The Dixiaires also sang a lot of the Jubalaire's arrangements... a good example is "Jube's Blues" on Queen, which they later did as "The Sun's Gonna Shine" for Coleman!

Things started to go downhill in late 1949, and by 1950, first their manager, Charles Newsome, had left... then guitarist, Abe Green, and finally Ginyard himself. The group soon broke up! Ginyard stayed on in music, but did so by opening a record store in NYC. This didn't last for long, and he had started The Du-Droppers by 1952. From this info, I'd say that all the sides cut up to 1950 are by this first group! The later Prestige, Harlem and SIW, I withhold comment!

This is a newspaper review from THE HOUSTON INFORMER, July 30,1949:

"The Dixiaires of NYC, appeared at the Wright Cuney Community Center auditorium Monday night, July 25, before a small but appreciative audience under the sponsorship of Rev. F.A. Allen, pastor of the Mount Calvary Baptist Church. After the theme, "Moving Up The King's Highway", the program included such numbers as "Let Me Ride", "Standing By The Bedside Of A Neighbor", "Preacher And The Bear", "Joshua", and "Old MacDonald". All I can say is that you should have been there. They were offered a contract by KGBC. They did not commit themselves to it that night."