[NOTE: All Newspaper Clippings shown on this page provided by Richard Koloda.]

Above: Cleveland Call And Post, March 6, 1948: A RICH FORMULA of beauty, glamour, and top-flight musical talent glistens nightly under the warm colored spotlight at Cafe Tia Juana where the very beautiful Ida James alternates by the hour with the celebrated Cats and the Fiddle.

This reporter was brought face to face with the dazzling Ida James, a perfectly gorgeous creature in her own right, regardless of her singing ability, but after hearing her odd, soothing vocals with the tender, slow phrasing we saw why she had to leave Erskine Hawkins and Earl Hines so the country could get a special share of this lovely parcel. Fresh from New York City's "Baby Grand" Club, Ida announced that she hoped we like her new Manor release. "Try A Little Tenderness" the first of seven platters she has recently waxed . She is married to John Hunt, trumpet player, formerly with Eddie Vincent and is from Philadelphia.

Little need be said about the Cats and the Fiddle, who are playing a return engagement and are held over for another week. The close harmony and synchronization of this glamorous ensemble stems from more than 10 years together since they graduated together from Chicago's Du Sable, the New Wendell Phillips High School.

Doris Knighton, at the piano, is the most successful of several candidates for the post of their original Jimmy Henderson, vacated by death in an unfortunate auto accident in 1939 [sic]. Jimmy may be remembered for his song, "I Miss You So." Doris studied music at Howard University, is an effective singer with personality to spare and her style gives the impression of both Nellie Lutcher and Gladys Palmer.

Ernie Price, that ball of fire on the electric guitar, is the slow one though rated highly among members of his set, and 'tis said, off the record, that he must be aided and abetted about an hour in advance of the others for most dates.

Austin Powell, guitarist, is the vocal leader of the group, formed the act at the old Wendell Phillips while attending the National Conservatory of Music, he married his high school sweetheart, is the proud father of a lovely little eight-year-old, Jo Ann.

George Steinback, bass, belies his aristocratic name, for he is the comic humorist of the group, and is fondly called "Mumbles" because of his lazy speech and easygoing manner. George played the Tuba at Wendell Phillips.

The Cats and the Fiddle boast of several new Manor platter releases, are particularly proud of their "I'm Afraid Of You" and believe "Honey, Honey, Honey" will go great when both of these numbers arrive in this section from the East, where they are going great.

There's no cover, minimum, OR ADMISSION CHARGE at the Tia Juana, at Massie and Pargate and E. 105th Street, during weekday, and just a small door charge on weekends, and you've never seen a finer aggregation of glamour, beauty and talent. Nuff sed?

NOTE: Per Marv Goldberg's article (see link next), Henderson contracted meningitis in mid-1940 and would pass away by the end of the year. Note that Ida James also recorded for Manor.

Click HERE for an article about The Cats And The Fiddle by Marv Goldberg.
(Will open in a separate window)

The Cats Have a Kitten to Go With Their Fiddle; And She Goes!

Cleveland Call And Post, March 6, 1948: The "Cats" had their "Fiddle" and they were doing all right -- but about a year ago they decided they needed that "something else" -- so they dug up a "Kitten" for their keys.

Sounds like double-talk? Well, we're talking about the Cats And The Fiddle, currently holding forth at the Tia Juana Club, and pretty Doris Knightener, the "Kitten" whose piano supplies the basic beat which lies deep down behind the rhythm with which this torrid combination is causing Cleveland's eardrums to smile. 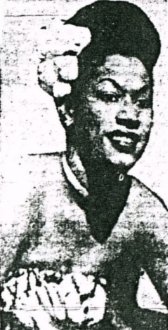 Miss Nightener (that's her stage name, she's married to Randolph Cotton, valet for the outfit) has been playing piano ever since she was a little girl. She has had her own combinations and it was from the last one of these, "Two Kings And A Queen" that she graduated to the Cats And The Fiddle a year ago.

Surprisingly good on the vocals, Miss Knightener reveals that she studied voice for a number of years and has been offered jobs with four of the nation's top bands but turned them down because they came at the wrong time.

It is not surprising to find that this kitten on the keys has a Cleveland background -- so many other top pianists, Art Tatum, Rose Murphy, Noble Sissle, have lingered here at some time or another -- so we were not keeled over when the lady told us that she is an old Central High School student and that she has a close relative here, Walter Jackson, at 10706 Englewood Avenue.

Now a resident of Washington, D.C., Knightener was born in Alabama but came to Cleveland when she was very young, living here until she was sixteen.

So many people know the Cats And The Fiddle only by that name, that Miss Knightener (a team player and a real trooper) is anxious for people to find out that Ernie Price is the man who makes all that beautiful music on the electric guitar; that bass man was christened George Steinback and that the regular guitar player, head of the combination, is Austin Powell.

Not one of the highest paid combinations in the business, a week's stipend for the combination runs to little more than a thousand dollars a week. Then, of course, there are records and special broadcasts, both of which pay off well. Miss Knightener is enthusiastic about the group's latest batch of recordings waxed just before the Petrillo deadline and to be released soon.

After three weeks more at the Tia Juana, the Cats And The Fiddle go to Chicago's Pershing Lounge for two weeks, then return to Cleveland for an eight week engagement. We'll be waiting.

NOTE: Throughout the above article, she is referred to as "Doris Knightener". The first article "Glamour, Beauty...", on the same newspaper page, identifies her as "Doris Knighton".

ADDED NOTE: A short Cleveland Call And Post article from May 17, 1952 identifies her as "far famed Doris Knighton, who for many years was vocalist and pianist with the nationally known Cats And The Fiddle, is now appearing at Jack's Music Bar".

CHI SINGS "I MISS YOU SO" AS CATS LEAVE

Above: The Pittsburgh Courier, September 14, 1940: Taking the swingistical trail Eastward this week are Chicago's Cats and the Fiddle, who journey to New York for a stand at the recently remodeled Apollo theater. The Cats stopped off in the Windy City on the week-end to say hello, coming from the Silver Congo, in Sioux City, Ia., where they recently closed. Lineup includes Charles Barksdale and Herbert Mills [sic] on bass and tipple, with Ernest Price and Austin Powell taking the vocal lead and doubling on guitar.

NOTE: Herbert Mills was with The Mills Brothers. The article should identify Tiny Grimes.


Above: Label images for Manor 1064-A and Manor 1112-A recorded circa March 1947 and February 1948 respectively. Click here for the flip sides ("When Elephants Roost In Bamboo Trees" and "Honey, Honey, Honey").

Listen to this week's selections by The Cats And The Fiddle: [Audio restoration by Dave Saviet.] 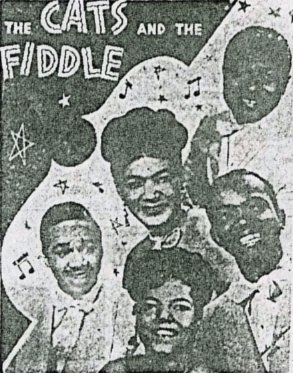