[The above photo provided by Paul Ressler.]

They had four releases on Decca (1939), two on Okeh (1940-41), and one each on HampTone (1946) and Tower (1947). One side on Decca was with Ethel Vick. As The Sharps And Flats (a trio... see photo at top of this page and label image/information below), they had three releases on Miracle (1948) instrumentally accompanying Sonny Thompson, Eddie Chamblee, Gladys Palmer, and Browley Guy.

The flip of "Swinging In The Candy Store" is "I'm Through", written by Turner and covered by The Ink Spots in late 1939.

A) Click on an option below to listen to Three Sharps And A Flat using Streaming Windows Media Player.

Long Gone (Parts 1 & 2) by Sonny Thompson with the Sharps And Flats was issued in March of 1948, and climbed to the top of the R&B charts that year. 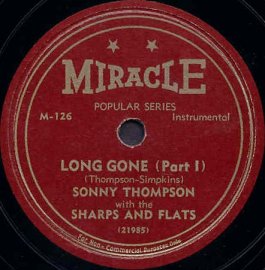 It is a great two-sided instrumental... Eddie Chamblee joins the four of them to blow a great sax on side two.

It is also famous as one of the great and early R&B 78's that were "bootlegged" back then... actually it amounted to illegal pressings from one plant who had rights to certain labels, Miracle included, but not to this side. They pressed it anyway, shipped it around the country, and collected the FULL money on it until they were found out. Big court action took place, which was covered by the music magazines!

The side was either purchased or recut by Thompson when he moved to KING! The KING sides do NOT credit The Sharps And Flats!