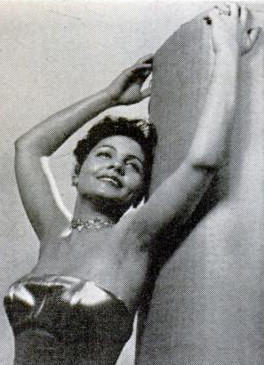 Nellie Hill is a voluptuous, cream-colored singer who is long on looks and short on voice. Yet, she sets sex appeal to music so sensationally that when she sings, men's hearts do flip flops. "It must be my style," Nellie says. "I act like a hussy on stage.... sing Jezebel-like songs, toss myself around like the number one girl on a philandering husband's list. I act evil, saucy, 'don't carish.' The men love it. But the women — well, I don't know."

Most women refuse to say they find Nellie exciting. They look upon her as a man-stealing, singing Marilyn Monroe. But men—all of them—have bushels of praise for the pretty little singer from Richmond, Va. They have given her sizzling ovations at the Baby Grand in New York City, Les Ambassadeurs in Paris and at the popular Flame Show Bar in Detroit. Said one Motor City critic when Nellie first appeared at the Flame in 1950: "The Flame came closest to living up to its name that night. Nellie's not a 'nice' singer—she's an incendiary one."

A petite but curvaceous glamour girl whose voice has just a hint of a Southern accent in it, Nellie has been an entertainer since she was 14. It was then that Nellie first won public acclaim. Her father, a factory worker in Richmond, put her in a dance contest at the shop. Nellie took first prize. A talent scout wanted to send the attractive little brunette directly to New York to be trained, but Nellie chose to stay home.

When she was 18, she was named class beauty of the graduating class at Armstrong High School. Asked what she wanted to do now that she was out of school, Nellie promptly replied, "become a singer." A year later, she married Wesley Hill, a Newark, N. J., singer with the Southern Sons, and set out for New York.

But success eluded Nellie for a while. A steady round of Army camps and hospitals where she gave free shows finally won her the attention of Jean Longman, the entrepreneur who was later killed in an auto crash.

Longman placed Nellie in Kelly's Stables, the New York nightery. She was such a hit that he sent her to Paris to appear at his co-owned Les Ambassadeurs.

Nellie sang there for six months. Upon her return to the United States in 1948, she recorded the Abbey bestseller record, Don't Worry Me No More. American night clubs began bidding for her. By 1950. she had joined the Flame where Johnny Ray was discovered. The result: Nellie became a sensation. Niteries, theaters, radio and television stations bid for her talent. Scores of ardent swains, frustrated husbands and many a wealthy businessman proposed marriage.

But "Naughty Nellie," with a buxom bounce to her style and a bewitching glint in her eyes, has other ideas. She divorced Hill in Detroit in 1952, and now confesses she carries a much-talked-about torch for Jimmy Ricks, deep-singing member of The Ravens. Until, and unless, the wedding bells peal, she will soon be singing at the classy Elmwood Casino in Windsor, Canada.