[Above image courtesy of Marv Goldberg.]


[Above clipping courtesy of Galen Gart.]

Above: Dot Records clipping from September 1950.

Trade Magazine (October 1950): Dot Records' "I'm So Crazy for Love" by the Cap-Tans and "Street Walking Daddy" by Margie Day making noise in the jazz and blues spots, with Randy Wood [Dot Records owner] of Gallatin, Tenn. reporting sales in excess of 15,000 per week....

From Götz Alsmann: The Five Keys recorded their own version of The Cap-Tans' "With All My Love" for Capitol in 1957 and released it a year later.

Listen to this week's selections by The Cap-Tans: [Audio restoration by Dave Saviet.] 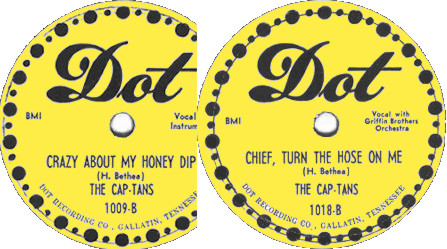