[Above image courtesy of Marv Goldberg.]

16 Year-Olds Produce Disk Click For Flair
HOLLYWOOD, Aug. 1, 1953 — Latest phenomenon in these parts is the growing popularity of a quintet of youngsters known as "The Flairs." The group's members, all 16 years of age, attend Jefferson High School here. They have no professional voice training and are still in their third year of high school. 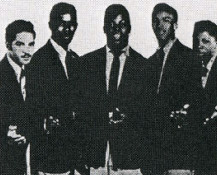 Group was picked up and put on THE FLAIRS wax by young Joe Bihari, of the well known Bihari recording family. He soon realized the possibilities of the group and signed them to a two-year contract. Their first two sides, "I Had A Love" and "She Wants To Rock," were recently released on the Flair label.
The Flairs will make their first professional appearance at the upcoming Gene Norman jazz concert at the Shrine Auditorium, Hollywood. The lads, Obie Jessie, Cornelius Gunter, Thomas Fox, Beverly Thomson and Richard Berry, write their own material.

Click HERE to view an article about The Flairs by Marv Goldberg.
(Will open in a separate window)

Above: Label image for Flair 1012 released in July 1953. Cornell Gunter sings lead on "I Had A Love," while Richard Berry does same on the flip song, which he composed. The Flairs had more than several records on the Flair label (1953-55), including releases as The Hunters and The Chimes (the latter with some changes in personnel).

Listen to this week's selections by The Flairs on Flair 1012 from 1953:
[Audio restoration by Dave Saviet.]
[To download audio files, right-click on link and then select "Save (Link) Target As..."]

This site is non-commercial. All information displayed is provided to further the general public's knowledge of RnB vocal group harmony.
Label simulation for this week's selection graphically reproduced by Tony Fournier.
The Flair Records clipping near the bottom of this page is courtesy of Galen Gart.