New York — The "father" came and conquered. Then he scooted — scooted from Broadway to take to the road. But everyone who heard Earl Hines' 18-piece band (that includes his two vocalists) agreed that the father's return to Broadway was sensationally successful.

Earl's four days at the Fiesta Danceteria revealed his band to be big, powerful and rugged. The brass had a bite that rocked the shiny chromium tables on three sides of the dance floor. The saxes — a 5-man front line which spread 12 feet across the bandstand — sported three better than average soloists in George (Scoops) Carey on alto and Franz Jackson and Bud Johnson on tenors. Over at the right as you enter the room Hines sat the Earl at the keyboard. The Earl is feeling fit these days with a new booking agency — William Morris — guiding his dates. "Three months ago out in Chicago I mighty near threw over my band," the father says. "Goodman offered me a job with a nice guaranteed salary and it took a lot of pro'ing and con'ing before I made my decision." 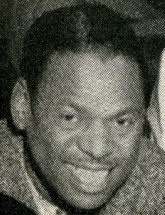 Those "pros and cons" led to the right choice, Earl believes. For the band he has today is the greatest he's ever had, he says, and John Hammond, Mildred Bailey, Helen Oakley, Leonard Feather and all the others who were at the Fiesta opening seemed to agree.

The Earl is set for a theater tour which will be split up with one-nighters, mostly in the East, In charge of the band's routings, and Hines' personal affairs, is Charlie Carpenter, who in 1931, when he was a youngster in Chicago, was hired by Hines as a valet. Carpenter not only took care of his boss' clothing, but on the side he composed You Can Depend On Me [sic*], You Taught Me To Love Again, and A Lover is Blue. Now Carpenter is a member in good standing with ASCAP, and Hines has a new valet.

Reminds of the 'Old Days'

With the band as vocalists are Madeline Green, who'll probably never live down the tag that "she's the girl Benny Goodman signed to a contract," and Billy Eckstein, whose Pha Terrellish style is often dropped for a session at the mike when he shouts the blues a la Joe Turner. Both were clicks at the Fiesta.

The band doesn't worry too much about intonation. The men prefer to beat off a good stomp and let go with a raft of hot solos. Jackson's tenor overshadows Bud Johnson's, which will surprise many Chicagoans who followed Hines' music over a period of years in his Grand Terrace days. The kids and sailors who hang out at the Danceteria stopped shagging to watch the band give with the jazz — the rough, rhythmic jump jazz which is so reminiscent of earlier Hines groups and all those led in other days by Fletcher Henderson, Don Redman, Bennie Moten, and the like.

The Earl hit Broadway. He tore it apart, even if his stay was short. Like Hawkins and Carter, the leader's solos are every bit as good now as they were, in person or on wax, a decade ago. But that band sizzled. The Morris office will have no excuses in selling it; Hines has what he wants and more important, the box-office payees want it, too. The year should be Earl's best since his Hot Five days as long as Morris execs do their best in the selling department.