Click HERE for an article about the The Feathers by Marv Goldberg. (Will open in a separate window)


Above: Label image for Show Time 1104, which is The Feathers' first record. They had two more records (plus one side backing June Moy) on Show Time (1954-55) and two records on Aladdin (1954-55). A new Johnny Staton led Feathers group had one record (plus another backing Jesse Belvin) on Hollywood (1956).

Billboard Clipping (December 1954): "JOHNNY DARLING" AVAILABLE ON TWO LABELS: There has been some confusion in the trade over the Feathers' recording of "Johnny Darling," originally released on the Show Time label. At first it was thought that the Aladdin label had picked up the original master of the song from Show Time; however, we are now informed that the Show Time master of "Johnny Darling" is still on Show Time Records. The label is selling the disk thru its regular distributors and no other firm has the master. The same tune was cut by the same group for Aladdin Records after the Show Time disks were already on the market, which caused all the original confusion.

Billboard Clipping (April 1955): HOLLYWOOD - MORGAN FILES SUIT OVER FEATHERS: Peter Morgan of Show Time Records here has filed an action charging breach of contract and unfair competition against Mesner & Mesner, Inc. and Aladdin Records in Superior Court this week. Morgan is also asking for an injunction, accounting and $100,000 worth of damages. Plaintiff contends that the group known as John Staton and his Feathers were induced to sign a contract with Aladdin as the Feathers, tho still under contract to Show Time. Morgan asked the court for an injunction to prevent further sale of the record "Johnny Darling" released on Aladdin.

Listen to this week's selections by the The Feathers: [Audio restoration by Dave Saviet.] 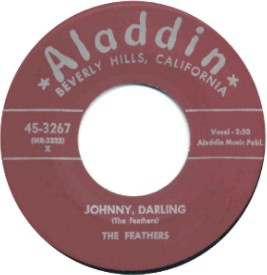