Above: Newspaper clipping from May 14, 1955. The Danderliers were from Chicago and consisted of James Campbell (lead on ballads), Dallas Taylor (lead on uptempo sides), Bernard Dixon, Walter Stephenson, and Richard Thomas.

Click HERE for an article about The Danderliers by J.C. Marion. (Will open in a separate window)

Listen to this week's selections by The Danderliers:
[Audio restoration by Dave Saviet.] 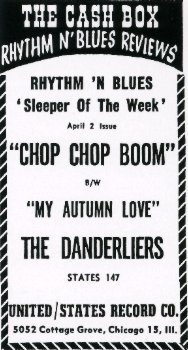 
[The above April 1955 clipping provided by Galen Gart.]