Above: Newspaper clipping from December 11, 1937: Rollin Smith, who Monday, made his debut on the English vaudeville stage as a "street singer", accompanying himself on the accordian. He has just begun a two-year contract with Foster's Agency, London's leading bureau, which has an enviable record of signing nothing but topnotchers. Mr. Smith, who plays six musical instruments and sings in eight languages, was born in Akron, O., and his last job in America was at the exclusive Coq Rouge on Fifth Avenue, New York.

Click HERE for another "Record of the Week" featuring Roland "Rollin" Smith.

(Above links will open in a separate window)

Above: Label for Perfect 12784 recorded on 1/7/32. It was also released on Banner 32360. The group consisted of Roland Smith, John Anderson, Dr. Doug Speaks, and others unknown.

"Kickin' The Gong Around" (an expression that means smoking opium) is the song that Cab Calloway made famous (1931). The flip, "Tiger Rag" is the A-side selection of The Mills Brothers' first record (1931).

From Barry Margolis: This was also issued on Romeo 1780: 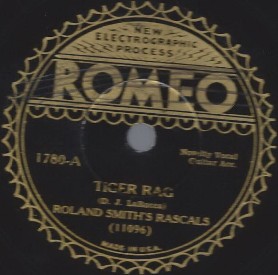 A) Click on an option below to listen to Roland Smith's Rascals using Streaming Windows Media Player.

B) Click on an option below to listen to Roland Smith's Rascals using Downloading Windows Media Player.