[Above photo provided by Paul Ressler.]

Above: Photo of Luis Russell. He played piano with King Oliver's Jazz Band in the 1920's prior to organizing his own band later in that decade.


Above: Label image for Apollo 1022. Note the composers credited on the label... Russell was musical director for the Louis Armstrong Orchestra from 1935 to 1943. The flip side is an instrumental.

Listen to this week's selection by Luis Russell And Orchestra: [Audio restoration by Dave Saviet.] 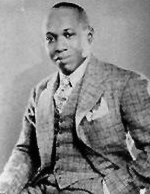