Click HERE for an article about The Five Keys by Marv Goldberg. (Will open in a separate window)

[Above clipping courtesy of Galen Gart.]

Above: Promotional clipping from October 1954 showing The Five Keys in the recording studio.


Above: Label image for Capitol 2945 released in October 1954. Maryland Pierce sings lead on both sides. It was followed (in January 1955) by the beautiful "Close Your Eyes" with Pierce on lead and Rudy West singing the echo responses.

Listen to this week's selections by The Five Keys: [Audio restoration by Dave Saviet.] 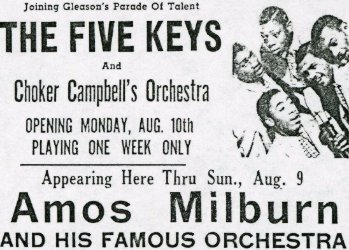 A) Click on an option below to listen using
Streaming Windows Media Player.

B) Click on an option below to listen using Downloading Windows Media Player.

[The above 1953 clipping provided by Richard Koloda.]