Click HERE for an article about The Four Vagabonds by Rick Whitesell, Pete Grendysa, and George Moonoogian (interviews by Marv Goldberg).


Above: Label image for Atlas VA 111. Note the group's simulation of musical instruments on both sides. The only real instrument is Ray Grant's guitar. Atlas, which started life as Premier, was a Hollywood, California label that also released The King Cole Trio, Frankie Laine and Johnny Moore's Three Blazers. This was The Four Vagabonds' only release on Atlas. They moved on to Mercury for one release (1946) and then Apollo for seven releases (1946-1947).

Listen to this week's selections by The Four Vagabonds: [Audio restoration by Dave Saviet.] 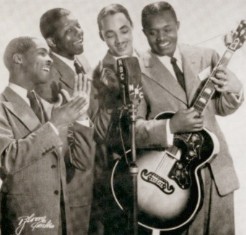 MORE FOUR VAGABONDS (will open in a separate window):