Click HERE for an article about The Hornets by Marv Goldberg.

[All clippings provided by Richard Koloda.]

[All clippings provided by Richard Koloda.]

Above: Newspaper clippings from August and October 1954. Note Virgil "Moondog" Brinnon at bottom of right clipping... was this Alan "Moondog" Freed's replacement at WJW?


Above: Label image for States S-127 recorded on August 12, 1953 and released in November that same year. States was a Chicago label, the subsidiary of United, owned by Leonard Allen. This was to become the only record by this original Hornets group and one of the most sought-after r&b vocal group collectibles of all time.

Listen to this week's selections by The Hornets: [Audio restoration by Dave Saviet.] 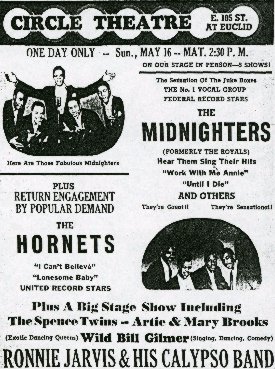 This site is non-commercial. All information displayed is provided to further the general public's knowledge of RnB vocal group harmony.
Label simulation for this week's selection graphically reproduced by Tony Fournier.