"My Baby-Kin"
by Savannah Churchill/Lenny Herman Orch.
on Manor 1068-B
released in 1947


Above: Cropped photo of Savannah Churchill captioned "FUTURITY FILM PRODUCTIONS presents HARLEM FOLLIES, A CLASSIC PICTURE Released by CLASSIC PICTURES, 1560 Broadway, N.Y.C." The film was released in 1950, but this picture of Savannah is from the early to mid-1940's.

Click HERE for Savannah Churchill Clippings. (Will open in a separate window)


Above: Label images for Manor 1061-A, 1180 B, 1068 B. While with Irving Berman's Manor and Arco labels, Savannah had vocal group backing by The Five Kings, The Sentimentalists/Four Tunes, and The Striders.

The song "My Baby-Kin" refers to Karen Lynn. Pat Best and The Four Tunes released a song entitled "Karen Lynn" on Manor in 1949. Was she some relation to Berman? When asked several years ago, Pat couldn't recall where the name came from.

Listen to this week's selections by Savannah Churchill: [Audio restoration by Dave Saviet.] 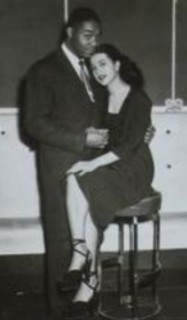 ALL THREE SONGS NOT FUNCTIONAL!

[Above: Another photo of Savannah, this time with Benny Carter.]