Above: A mid-1954 photo of The Jewels. (L-R at microphones) Rudy Jackson (tenor), James Brown (bass), Johnny Torrence (tenor), and Dee Hawkins (tenor). After this photo and before recording "Hearts Of Stone", a fifth member, Vernon Knight (baritone), was added to the group.

Click HERE for an article about The Jewels by Marv Goldberg. (Will open in a separate window)

Listen to this week's selections by The Jewels: [Audio restoration by Dave Saviet.] 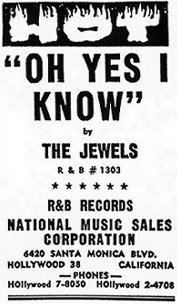 THANK YOU to all who have helped with "Record Of The Week" during 2006, including the following:

Your assistance is truly appreciated!