Click HERE for an article about the Eddie Carter Quartet by Eugene Chadbourne at All Music Guide.
(Will open in a separate window)


Above: Label image for M-G-M 11405-A released in January 1953. Note that the composer is "Carter". The Park Avenue Jesters' 1947 release of the same song shows Carter as composer along with two other names. Also note that publisher is Beacon Music, which was owned by Joe Davis. It was about this same time that Davis started producing sides by The Crickets for M-G-M.

Listen to this week's selection by the Eddie Carter Quartet:
[Audio restoration by Dave Saviet.] 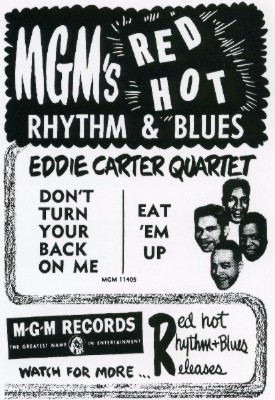 [Clipping at left, from January 1953, provided courtesy of Galen Gart.]