Above: Photo of Savannah Churchill.

Click HERE for an article about Savannah Churchill by J.C. Marion.

[Special thanks to Lou Rallo who provided the above records.]

Above Right: Label image for Columbia 30146 released in November 1948. This is a master that Columbia obtained from Manor. 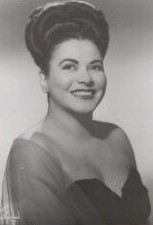 A) Click on an option below to listen to Savannah Churchill And The Four Tunes using Streaming Windows Media Player.

B) Click on an option below to listen to Savannah Churchill And The Four Tunes using Downloading Windows Media Player.

SAVANNAH CHURCHILL - PARTS 1 & 2 (will open in a separate window):