[Above photo provided by Paul Ressler.]

Click HERE for an article about The Counts by Marv Goldberg. (Will open in a separate window)


Above: Label image for Dot 1188. This was the first record of eight issued by The Counts, all on Randy Wood's Dot label, between January 1954 and January 1956.

Listen to this week's selections by The Counts:
[Audio restoration by Dave Saviet.] 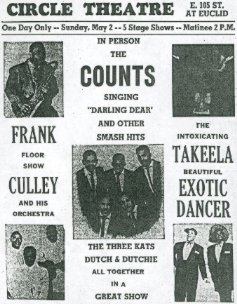 
[The above May 1954 clipping was provided by Richard Koloda.]


ANOTHER SELECTION BY THE COUNTS (will open in a separate window):

Above: Alan Freed, "King of The Moondoggers", Dancing and Stage Show at the Cleveland Public Auditorium (August 6, 1954).