Above: Varsity #108, Released 1948. There is very little known about this group. The Jimmie Valentine Quintet did have some other releases on the Varsity label, including a cover of "Walking With My Shadow" on Varsity #107.

Click on an option below to listen to "Blue Bird Of Happiness" by Jimmie Valentine Quintet using Windows Media Player. 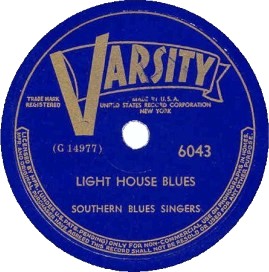 The Varsity label was re-started in 1948 by Eli Oberstein and continued into the early 1950's. It was located in New York City until moving to Meridan, Conn. in late 1949.

Varsity and its affiliated label, Royale, were intended to be low budget labels primarily using material acquired from defunct labels. Of special interest to vocal group collectors are the Harmonaires cuts recorded for Majestic (ca 1948) and released on Varsity and Royale in the early 1950's.

Another rare vocal group gem from 1948, "Light House Blues" (see image at left), is actually a reissue of a 1929 cut by The Southern Blues Singers (AKA The Charleston Blues Trio), originally released on Gennett. 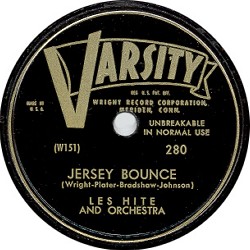 
For more information about the Varsity/Royale labels and a discography, please click HERE.

NOTE: The original Varsity label is from the late 1930's. It had the great Palmer Brothers recording for it, along with Les Hite! In fact, T-Bone Walker cut his first record under THAT name with Les Hite in August 1940, "T-Bone Blues". What makes it unique is that he does NOT play guitar on the record, although he was so great! The solos are by Hite's guitarist, Frank Pasley, who later joined up with Joe Liggins' Honey Drippers!

Thanks go to George Moonoogian, who contributed images and information regarding the Varsity Label.