Above: Photo of The Four Blues. They also recorded gospel music as The Golden Echo Quartet. The members for the DeLuxe recordings were James Starkes (stand-up bass), Ganzyetter Thompson (electric guitar), Joseph Gardner (piano and vibraharp) and Carroll Jones (drums).

Click HERE for an article about The Four Blues by Marv Goldberg.
(Will open in a separate window) 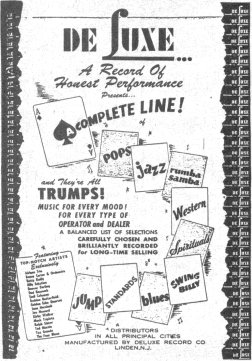 DeLuxe was located in Linden, NJ and owned by David and Jules Braun.

In September 1947, after DeLuxe had incurred financial problems, King Records (Cincinnati, OH) purchased 51% of DeLuxe. In early 1951, King acquired the Braun's remaining interest in DeLuxe, which then officially became a King subsidiary.

Some of the early artists released on DeLuxe:


[The above ad provided by George Moonoogian]