Above: Photo of The Gates, better known as The Golden Gate Quartet, from the movie "A Song Is Born", 1948. (L-R) Connie Fredericks (playing piano), Alton Bradley, Henry Owens, Clyde Riddick, and Orlandus Wilson.

Golden Gate Quartet In "Star Spangled Rhythm"
HOLLYWOOD, Nov. 5 — It isn't just luck or vocal compatabilty that permits members of the Golden Gate Quartet to sing in such surprising unison, as fans will see when they view the famous quartet in the forthcoming Paramount picture, "Star Spangled Rhythm."
When they blend their voices in song for their "Dreamland" number with Mary Martin and Dick Powell, every word is spoken in such clear-cut; simultaneous enunciation without a single lap-over between voices that one gets the impression this is one voice with four musical ranges.
All this is because of practice and nothing more. Those four boys have been singing together for 16 years. They started harmonizing as grammar school boys in Norfolk, Virginia, sang all the way through high school and right on out into the professional world, where they have been making a living together ever since. 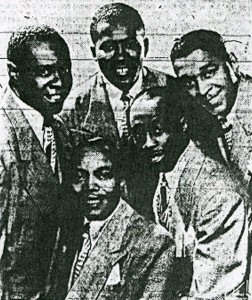 The famous Golden Gate Quartet, radio and concert artists, will appear in Cleveland in a concert to be held at the Masonic Temple, E. 36th street and Euclid avenue, Sunday, January 9 at 7:30 p.m., under the sponsorship of the Macedonia Baptist Church, 6007 Outhwaite, the Rev. H. Y. Solsbery, pastor.
This is the first major effort of the congregation in their financial campaign to remodel and expand their present church home. Friends and well wishers of Rev. and Mrs. Solsbery and the members of Macedonia are requested to give their wholehearted support in this great undertaking.
Among the most popular radio artists, the Golden Gate Quartet is composed of Clyde Riddick, tenor; Willie Johnson, tenor and arranger; Henry Owens, baritone; and Orlandus Wilson, bass. Originally from Norfolk, Va., they began their professional career as a travelling quartet in the South, where they went from church to church, singing spirituals and earning their living. They have sung as a unit for the past fifteen years. Several years ago an appearance on a radio program led to an NBC contract.
Some of their renditions are such as "You Better Run," "Blind Barnabus," "Swing Down Chariot," Moses Smote The Water," "I Declare This Old World Is In One Bad Condition," "Sylvia," "My Old Kentucky Home," "Joshua Fit the Battle of Jericho," and many others.
Originally an unaccompanied group—except for the sensitive assistance of a drummer who served as the background for their harmonies— the Golden Gate Quartet switched to a guitar accompanist several years ago and then added ten four-bar introductions from a pianist. Clevelanders will surely want to see the boys in person and hear their melodious voices.

[Above Pittsburgh and Cleveland news articles provided by Richard Koloda.]


Above: Label image of Columbia 30149 recorded on October 19, 1948 and released in December of that year. The Golden Gate Quartet had just left Columbia to join the Mercury label when this was released. It is the only record by them under "The Gates" name. They began their recording career on the Bluebird label as The Golden Gate Jubilee Quartet in 1937.

Listen to this week's selections by The Gates on Columbia 30149 from 1948:
[Audio restoration by Dave Saviet.]

[To download audio files, right-click on link and then select "Save (Link) Target As..."]